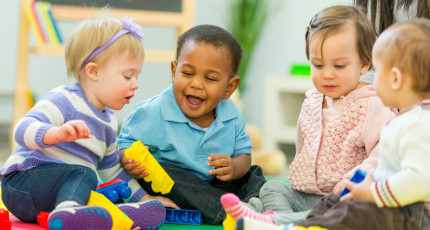 Before you wonder how far can a pre-schooler’s temper tantrum bothers anyone, let’s address some common challenges every parent face in bringing up their little ones. From the primitive impulses like biting, hitting, whining or lying to the over-the-board behaviours like running in the streets, acting out in a play-date, or throwing the eatables away, the ‘acting-out’ intensity can vary.

Care should be taken to observe the pattern of their tantrums. These can just be the shades of “building their esteem and individuality”. But in the worst-case scenario, these can signal Obsessive-Compulsive-Disorders, Autism, etc. which should be addressed with the right kind of therapies and treatments.

Our little ones might be trying their best to please us by following the tiny rules we’ve set for them. But sometimes it can be hard for them to understand the ‘adult-logic’ and discriminate right from wrong. We don’t want to use the “trial and error” method on our poppet, you don’t want to yell at them either; So here are some Pro-tips suggested by parenting experts, oriented towards “loving without spoiling”:

Permissive parenting has its own flaws but appreciative measures go the extra mile in improving the behaviours than the corrective punishments. Every time you see the kid making an active effort towards correcting a particular habit, appreciate notes and incentives will help them feel good about themselves. Try preparing a ‘behavioural chart’ and stick star stickers every time they make a commendable leap in habit formation and correction. And even as you gift them for good deeds, replace ice creams and toys with books and learning materials. This should instil an interest to learn new things!

Yelling at them belittles the kid. This will affect their sense of self-worth. Instead of tagging them as a bad-kid, and forgetting the rest, try making your intentions clear. Let the kid be sure about the outcomes that may follow on doing a particular action. Share the ideas on empathy with them. Instead of saying “No” and “Don’t” explain why you are sticking to them. Yelling and punishing send mixed signals to them, so try gentle disapprovals and explanations.

Like for instance, if you want them to stop hitting you, try saying

"Don't hit me, hitting hurts severely. So, I don’t want you to hit anybody" instead of yelling stop a hundred times. Keep it short and sweet when you explain why you don't want them to behave in a certain way. This goes for appreciations as well - instead of saying "you are the best kid in this whole World" and settling a competition in his mind, try being precise - "I appreciate what you just did - that’s what every good child would do, keep up the good work".

Be a good role-model

To be precise, Practice what you preach! Be aware that you are being constantly observed and you can’t break the rule you advised your kid to abide. On breaching the rules, make sure that you call them near and explain what circumstances made you do so.

Don't vent your negative emotions in front of him. They might process it in another way and can affect every other decision-making point in their life. Be careful with the words you choose to speak in front of them, as well.

The consistency of your reaction to their tantrum is another important thing. Make sure you carry over the same disciplinary actions from last week, if they are on repeating mode.